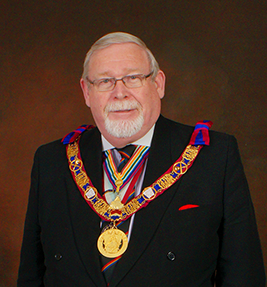 It is with very great pleasure that I take this opportunity to extend to you and your families my very best wishes for a happy and healthy 2020, a special and historic year for our Province, it being our 150th Anniversary. On 9 February 1870 Theodore Mansel Talbot, the tenth Provincial Grand Master of the Craft Province of South Wales, was appointed as Provincial Grand Master of the newly constituted Mark Province of South Wales. At that time there was only one Mark Masons' Lodge in south Wales, that being Langley Lodge No.28 , in Cardiff. Today, 150 years later, we are the Province with the eighth largest membership and have 33 Mark and 23 Royal Ark Mariner Lodges. Once again the past year has been a busy Masonic year with its highs and lows. In February I attended a meeting of the Arthur Lewis Mark Lodge No585 to present the Lodge with a Mark Benevolent Fund Grand Patron Diamond Award Collarette and to celebrate the 25th anniversary of my Advancement into the Order. Two days later I was privileged to present another Grand Patron Diamond Award Collarette to St Illtyd Mark Lodge No. 784. Six other Lodges were awarded MBF Grand Patron Gold Award Collarettes during the year and I continue to be delighted that Brethren of our Province recognise the excellent work carried out by the MBF and readily contribute to the fund. In March the Caerffili Mark Lodge No.1348 celebrated its 50th Anniversary and in September the Brychan Mark Lodge No.1725 celebrated its 25th Anniversary. I congratulate both Lodges on reaching their Masonic milestones. There were personal milestones reached also with VWBro John O' Leary celebrating a 50 years membership in the Order and both WBro Gwyther Barnes and WBro Edward Bolton celebrating 40 years memberships. Unfortunately this year we have suffered the loss of several distinguished Brethren. Amongst them were our Past Deputy Provincial Grand Master, VWBro Tony Moore, and VWBro Alan Rosser Thomas. The Province will greatly miss the presence of such outstanding Masonic characters. At the last Installation Meeting within the Province in June, I suffered a fall which in effect immobilized me for close on three months. It meant that I could not attend the highly successful 151st Mark Benevolent Fund Festival in Brighton, hosted by Sussex Province, which raised £1,357,663 for our charity, the Mark Benevolent Fund. It also prevented a visit to Romania, where I was due to Consecrate another Mark Lodge in this rapidly expanding area . Here I must thank the Assistant Provincial Grand Master, WBro Philip Davies , and the Provincial Grand Director of Ceremonies, WBro Alun Thomas, for the part they played in that Ceremony. We now look forward to our 150th Anniversary year. In April we intend to launch our history of the South Wales Province, to which many Brethren have contributed Lodge histories, and which our Deputy Provincial Grand Master, WBro Dr Paul Calderwood , has spent many days editing. I thank all the contributors for their assistance and again express my grateful thanks to Dr Paul Calderwood for the immense and important contribution he is making in recording the Province ' s histo ry. In July the Brethren of the Province and their partners will gather at the Cardiff City Football Stadium, in the presence of the Pro Grand Master, MWBro Raymond J Smith, for a Gala Dinner to celebrate our Anniversary. I thank the members of the 2020 Appeal Committee for their tireless efforts to ensure the success of this event Again this year I would like to express my grateful thanks to the Deputy Provincial Grand Master and Assistant Provincial Grand Master and the Provincial team, for the support they give me by representing me at Installation Meetings in the Mark and Royal Ark Mariner Degrees. I could not wish for better. In conclusion, I thank all the Brethren of the Province for their kindness , goodwill and support, especially during my convalescence over the summer. It was much appreciated and I am extremely grateful to you all. I look forward to this important year with great anticipation, to meeting with you all once more, and to promote our friendly Mark and Royal Ark Mariner Degrees throughout South Wales.
I finish as always with the message: Enjoy your Mark and Royal Ark Mariner Masonry and Mark well. With the warmest and most fraternal regards and best wishes for the year ahead.

available from the Provincial Office

Dates for your Diary